What Coaching, Culture, and Influence Have in Common [Remote Manager Roundtable]

In this week's Remote Manager Roundtable, our host Matthew Cooke answered questions about self-care, maintaining alignment with growth, and micromanagement. 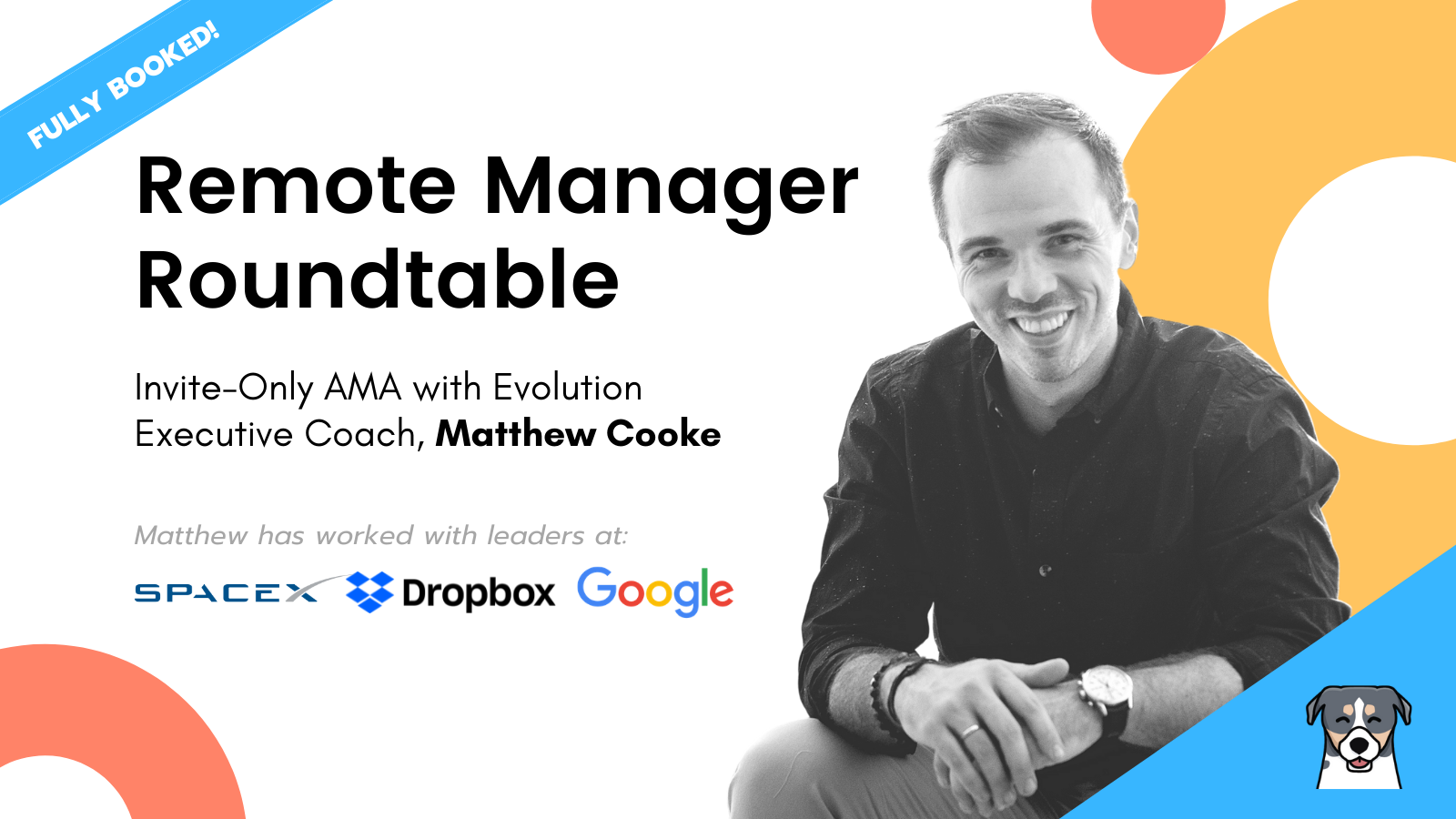 Every week, we invite ten remote managers to take part in our Remote Manager Roundtable. They submit their questions in advance and discuss them live with an executive coach. ‍

This week’s Executive Coach was Matthew Cooke. Matthew is a partner of Evolution Coaching and has had the privilege of working with Iterable, Dropbox, and Twitter, and has consulted with leaders from SpaceX, Google, Apple, Slack, and teams from multiple industries, including marketing, media, and tech. Combining principles from neuroscience, biology, and personal performance strategies, Matthew helps leaders regulate their nervous systems, refocus their minds, reconnect with their emotions, re-ignite their creativity, and reprioritize their work lives.

We met some amazing leaders from Glossier, Greenhouse, Arc.dev, and more. We’re covering their questions and key learnings in this blog:

In a remote world, where I am very focused on my people, how can I look after myself so I can be there for them?

I love this question. So much of my work is focused on how to have more energy, more focus, and more creativity. I’m reminded of a quote from The Bullet Journal Method, “In the most connected time in history, we are quickly losing touch with ourselves.” For so many of us, it is a powerful exercise to recognize what is truly meaningful for us.

When it comes to caring for ourselves, what felt really important and powerful for me was to take time and unplug. In a remote world, there’s value in setting up really powerful boundaries for ourselves. It’s important we go all the way, create boundaries for our calendars and turn work off. I personally don’t start taking calls until ten to give myself time to think.

One of my favorite hacks to unplug is to set a thirty-minute timer on your phone and put it in another room. To simply have your phone in a separate space and to give ourselves pockets and windows away from technology is super important.

I would love to get insight on coaching early career/entry-level employees. For many of my direct reports, this is their first corporate job so I’m not just coaching them in this role, but also teaching them how to be professional people in the world.

One of the things we learn as coaches are that all of our clients are complete on their own. Your job as a manager is to draw out the awesomeness that’s inside them already.

In answering this question, I think it’s important to bring it back to them. Sometimes we want to pull people up the hill, but it’s going to be so much better for your energy and your conversations if you start to ask them what they’re looking for in their career. The biggest thing you can do for someone young is to allow them space and room to grow.

I recommend getting a pulse from them about what they’re enjoying and what they’re hating. We need to empower them, help them grow, and allow them to take ownership. All the while, let them know you’re there to support them.

I have a mix of very junior and very senior direct reports. I would love to understand your perspective on micromanaging and the boundaries for that. What are the triggers/questions you can ask to find out if you’re micromanaging?

The first thing I would say is that it’s all individual. This may sound annoying, much like that vague professor in college who says "it depends," but it really does depend on the person. That’s part of being managers, we’re stepping away from the number and analytics-driven parts of the business and focusing on the people.

I think it’s helpful to have individual conversations about micromanagement. You can be pretty head-on about your questions: “When have you been micromanaged? What was that experience like for you? When have you felt hovered over?" Some people need more hand-holding than others and it helps to ask people how often they want to be checked in on.

Get expert tips on team building and remote culture sent
straight to your inbox every Wednesday.

As our team grows rapidly and becomes increasingly distributed, what are some creative, effective ways to encourage cross-department bonding (not just collaboration)?

There’s really no silver bullet here. I’ve talked to a couple of teams. Some are doing written notes, as in actually mailing notes to each other which is really cute. Also, phone calls are really phenomenal. I think it’s cool to be more casual about it. We don’t want to give too much structure to it. We want it to feel like getting to know each other and be really informal.

Corine also added a tip here: What we’ve noticed is that as companies start to scale, their trust decays as casual touchpoints are lost. Teams need consistent, casual opportunities to get to know one another beyond major company outings and events. If you’re planning to be remote long-term, aim for consistency over intensity.

How do you screen for team player capabilities in an interview?

Yes! Here are a few things to keep in mind:

Ask them the question directly in the interview, “Name an example where you were a team player.” Notice whether they actively listen to you as the interviewer or if they dominate the conversation?

Listen throughout the interview for these cues in how they respond to questions. Do they seem to consistently:

I also recommend recording interviews. There are so many variables that come into play in an interview, it would help to rewatch the interview to see what they are saying verbally and nonverbally.

How to increase influence across teams in the remote setting? I have been doing OK within the marketing team, but when it comes to increasing influences across teams I find that it’s a lot harder. So I’d like some advice about working across functional teams for both me as a manager and for my team members.

Influence: (noun) “The capacity to have an effect on the character, development, or behavior of someone or something, or the effect itself.”

There’s no silver bullet here. It takes time and energy to increase influence. The most important part of being influential is being top of mind for an employee, as someone who helped support them or added value.

In order to get true influence and not just obedience, you need to spend time with each person and make a personal connection and impact. That’s what creates loyalty and influence among our people. Writing a daily post to everyone on Slack can help, but is a band-aid to true connection, and inspiring them to be fully engaged when working for you. People like supporting people, so if there is a true bond between you and your people they’ll stick around and want to be a part of what you are doing.

Also, encourage real connections across functional teams so they know each other as other humans, and not just the “marketing team” or the “sales team.”

What is your approach to giving tough feedback to a rep?

Corine is Co-Founder of Kona. She writes regularly on emotional intelligence and empathetic remote leadership. Her work has been featured by Yahoo, TechCrunch, Entrepreneur, Harvard Business School, Forbes, and more. She’s a speaker at remote work conferences like GitLab Commit 2021 and she’s advised Fortune 10 companies on remote strategy.